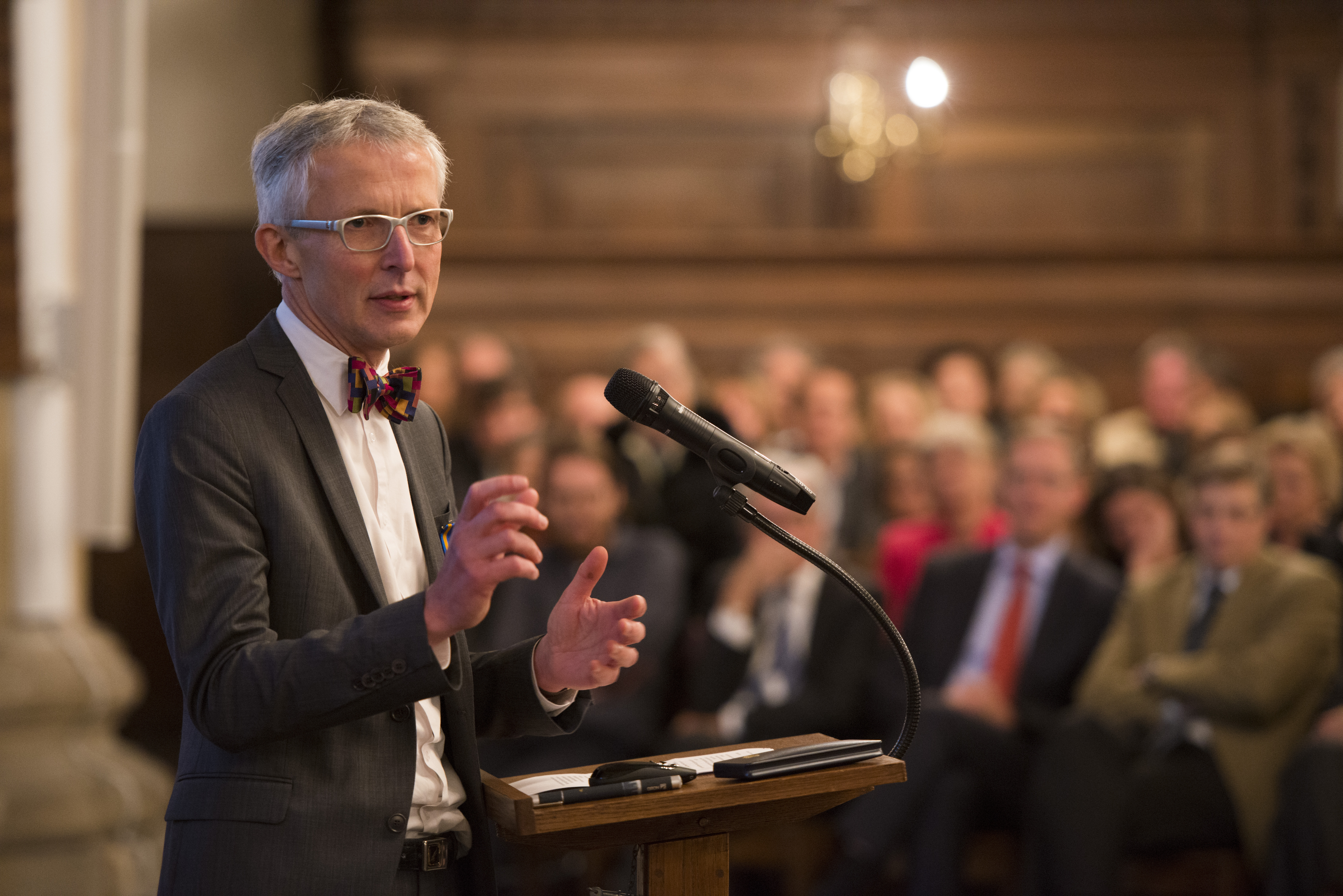 “Ageing is a complex beast,” said Rudi Westendorp in his closing address of symposium The Longevity Revolution on 11 December in the Mare Church in Leiden. To curb this many-headed beast, commitment and input is required from various disciplines. The symposium, organized in honor of Westendorp’s farewell to Leiden and his move to Copenhagen University as of 1 January 2015, offered an impressive series of lectures about the many facets of vital ageing.

Taking charge
In the first part of the symposium, the latest scientific insights were shared. Frans van den Ouderaa, Chief Scientific Officer at Leyden Academy, discussed the relationship between physical ageing (from healthy to frail) and vitality (from vital to apathetic). Dutch seniors turn out to be relatively vital and prepared to take charge of their lives. Their wishes, habits and motives should be the starting point in innovation. He received acclaim from Andrea Evers, Professor of Health Psychology at Leiden University: she stated that people know very well what is good for them. However, only 5 to 10 percent of the population has a healthy lifestyle. On the positive side, people want to take responsibility for their health: in addition to information they need guidance, and digital channels prove to be as effective as a face-to-face approach. The environment of people plays a decisive role in seducing people to healthier behavior, said David van Bodegom, scientific staff member of Leyden Academy. With convincing examples, he showed that there we can achieve great results with subtle adjustments in our environment.

Inside the human body
Tom Kirkwood, Associate Dean for Ageing at Newcastle University, invited the attendees to look for the root causes of ageing. What happens inside the human body, is ageing genetically programmed? According to Kirkwood, our genes account for only about 25%, the rest of our ageing is a gradual accumulation of cellular damage. This is caused by various factors, that can be influenced by our lifestyle choices. Ulla Wever, Dean of Faculty of Health and Medical Sciences at Copenhagen University, made a nice parallel with the ‘ fountain of eternal youth ‘. Immortality is a recurring theme in art and religion, but reality is that we become weaker and we eventually die. The research carried out in Copenhagen into the biology of ageing and healthy ageing, is addressed from various disciplines and partners are invited from outside the University and across borders. The need to join forces also applies to the medical world, according to Mark van Buchem, Professor of Radiology at Leiden University Medical Centre. He is a strong advocate for interdisciplinary research into dementia. Conditions of the heart and aorta are associated with a decrease of the brain function, yet you rarely end up visiting a cardiologist with complaints about forgetfulness. A joint approach is needed to fight dementia.

Individual desires
The second part of the symposium was dominated by innovation in elderly care. The speakers were unanimous about the importance of taking the wishes and needs of the elderly themselves as a starting point. According to Joris Slaets, Professor of Geriatric Medicine at University Medical Centre Groningen and the successor of Rudi Westendorp at Leyden Academy as of 1 January, we should not forget that quality of healthcare in The Netherlands is at a very high level. Still, there is room for improvement. Slaets would like to see another quality measure in elderly care: experienced well-being. But attention to the individual desires and needs of people is at odds with the current governance structure in health care, focusing on uniformity and control. Taking positive social well-being as a starting point was also an important message from Ab Klink, Professor of Health, Labour and Political Control at VU University Amsterdam. According to Klink, much progress and profit can be made in prevention, like training courses to counter loneliness, fall prevention and support for overburdened family caregivers. Pauline Meurs, chairwoman at ZonMw, illustrated the importance of attention for the individual on the basis of her vital mother of 94. According to Meurs, we should invest more in the training and education of health care providers: their work has become more complex, they must listen more and enter into conversations. After all, putting the elderly in control of their own lives also implies that we put health care providers in control of their own work. According to the final speaker Kees van den Burg, Director-General Long-Term Care, the hearts cries of Slaets, Klink and Meurs are at the core of the transition that is now taking place in Dutch elderly care, shifting from a institutional focus to a focus on what people still want and can.

Optimistic view
The symposium The Longevity Revolution offered a comprehensive overview of the latest scientific developments in healthy and vital ageing. The optimistic view of Rudi Westendorp, focusing on the strengths and opportunities of senior citizens, was the common thread in all lectures. For his contribution to the elderly care and a more positive image for seniors in The Netherlands, Westendorp received a Royal decoration from Mayor Lenferink of Leiden at the conclusion of the symposium.