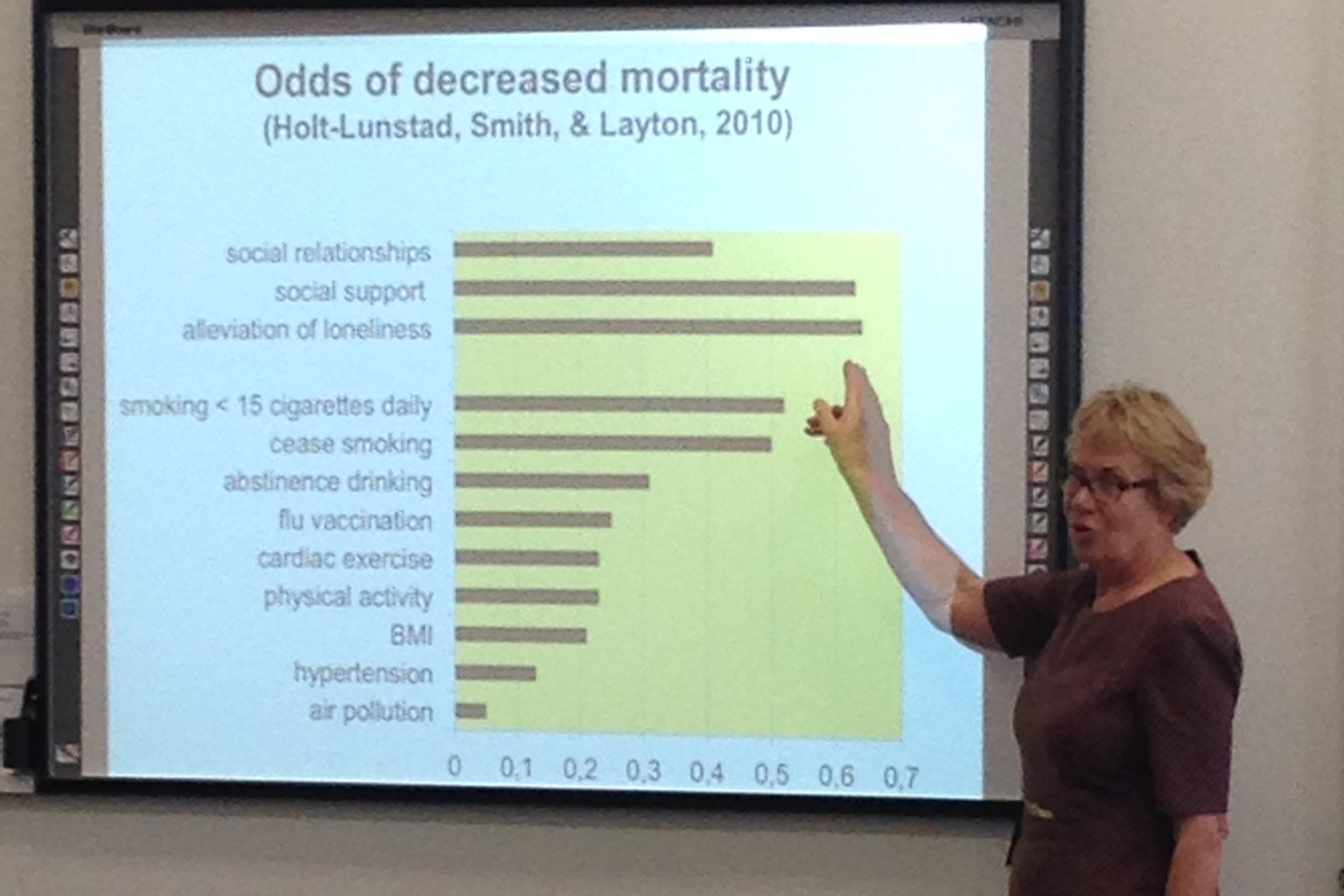 With over fifty years of research experience Jenny Gierveld (76), emeritus professor of sociology and social gerontology, is truly an authority in the field of loneliness. In 1969 she gained her PhD at VU Amsterdam and she is still involved in international research on loneliness and types of social relationships among the elderly. During the Masters of Ageing lecture at Leyden Academy on May 19, professor Gierveld focused on social relations in later life and the differences between countries.

Grandparents take care of the children
In the 1980s professor Gierveld developed a measuring scale for loneliness on the basis of six objectives, in which the term itself was strictly avoided: “If the word loneliness is brought up, people usually start talking about someone else.” With this scale, for example, the degree of loneliness can be compared between countries. She found that older people in Eastern and Southern Europe are much lonelier than seniors in Western Europe, despite the fact that grandparents in countries such as Russia and Georgia co-reside with their families much more often. In contrast to the assumption that there is more social integration and children take care of their parents. Professor Gierveld went to Georgia herself to understand how living together did not lead to a reduction in feelings of loneliness, as it turns out the grandparents take care of the grandchildren and run the household, often in difficult conditions. Thus, countering loneliness demands an interplay of individual and societal factors.

Loneliness is deadlier than smoking
That loneliness a serious social problem that endangers public health, was proven by research by Julianne Holt-Lunstad et al. from 2010, confirmed in 2015, that showed that the mortality risk due to loneliness and a lack of social support is greater than the damage of 15 cigarettes a day. Professor Gierveld outlined that changing family ties will increase  the development of loneliness in The Netherlands: we have fewer children, who often live further away and the frequency of face-to-face contacts is dwindling. To illustrate these developments she mentioned a recent commercial by Dutch telecom provider KPN, where two toddlers Skype with grandpa Henk on the other side of the ocean.

Strengthen your convoy
Professor Gierveld finished her lecture with a rather bleak message and an important practical advice. The gloomy message: after fifty years in the field, she must conclude that most organisations are too optimistic about the effect of interventions. Despite all the well-intentioned initiatives from churches and volunteer organisations it proves extremely difficult to reach and help very lonely people. Professor Gierveld believes in prevention and advised her audience to invest in their ‘convoy’, a powerful metaphor for the social network as a group of ships that sail through life together. Take good care of your family, friends, and neighbours. Think twice before you move to a new city and try your best to solve quarrels, because particularly at a higher age it is quite hard to add new vessels to your social convoy.

If you would like to stay informed about our lectures, please send us an email.